With its imposing Art Deco exterior, the Pathé Tuschinski in Amsterdam is The Netherlands’ most prestigious cinema. Inside it has been restored to its original 1920s glory, while at the same time being extended and modernised to satisfy the expectations of 21st century filmgoers. The latest phase has included the installation of a bespoke Alcons Audio system, featuring the unique CRA72cst and the first installation of the company’s new Sentinel 4-channel digital amplified loudspeaker controllers. 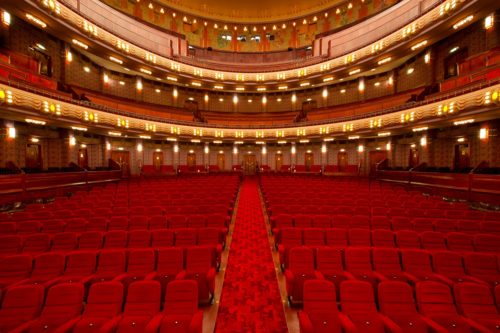 Regularly used for ‘red carpet’ premieres, the Pathé Tuschinski’s 740-capacity main auditorium gives audiences the opportunity to watch films in luxury. Private boxes and ‘love seats’ are a feature, while wine and food can be ordered for at-seat delivery. As well as films, the room also hosts special events, concerts and weddings.

“The entire system sounds stunning and is the perfect match for a cinema as important, visually impressive and rich in history as the Pathé Tuschinski.” Matthew Jones, Dcinex general manager

“Due to the high profile of being the Netherlands most prestigious auditorium, the complexity and challenges created by the its unique acoustics and the many available options, Pathé chose to have an outside organisation advise them of what the best option would be,” says Matthew Jones, general manager of Dcinex, the Liege-based pan-European cinema solutions company. 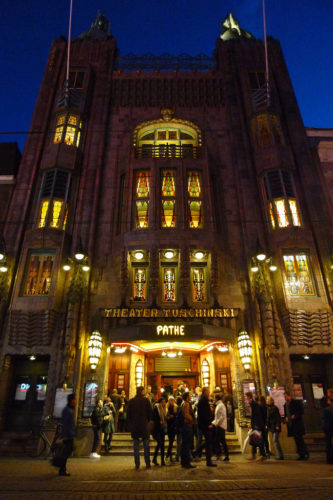 “We advised using Alcons, based on our positive experience with both the company and its systems. In due course, having looked at all of the available options, Pathé also ended up recommending Alcons as the best solution themselves.”

Difficulties presented by the installation included needing a main system and subs with a maximum depth of only 30cm/12”, but which could deliver the highest quality audio over 45Hz-20kHz for the mid/highs, with the subs down to 25Hz. Another was the considerable height of the auditorium, which features two balconies, in combination with the difficult acoustics; Being a listed building, no acoustical optimisations could be made, yet excellent coverage control .

To meet these challenges, three units of CRA72cst were flown behind the screen. The CRA72cst is a dedicated version of Alcons’ Cinemarray pro-ribbon line-source system with a depth of just 285mm./11” It features nine RBN401, proprietary four inch pro-ribbon transducers for high frequency reproduction down to 1kHz., plus nine 6.5” and six 12” reflex-loaded loudspeakers for mid- and low frequencies. It is powered and controlled by three Alcons Sentinel3 amplified loudspeaker controllers. 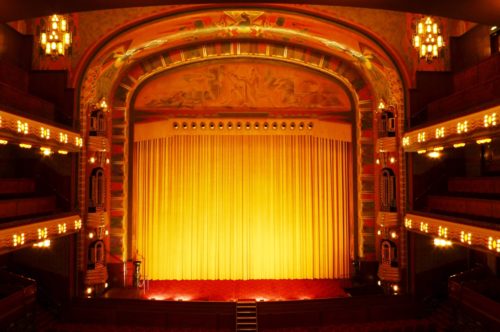 The curtain closed during events. 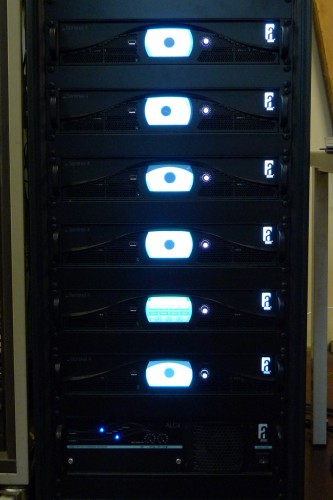 “Custom-made to the auditorium’s needs, the Alcons system was the only one that could deliver the high flexibility required in the available space, while at the same time providing an unparalleled audio experience,” says Matthew. “It is capable of delivering the required SPL to even the highest seat in the top balcony, providing a great audio experience no matter where your seat is. It also has the flexibility for the section of the CRA72cst that’s aimed at the top balcony to be switched-off, when that balcony is not is use.” 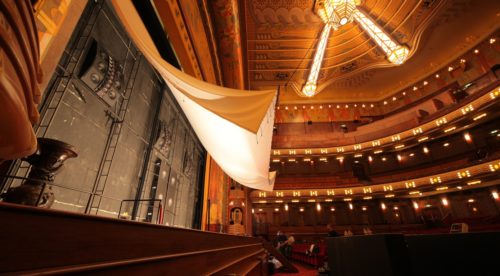 Sneak-peak behind the screen of the CRA72

“We are very happy with the new sound system,” adds Tuschinski’s Theatre Manager David Hanemaayer. “It sounds great and is a big improvement over the previous system. So much so that our visitors and suppliers have also noticed that we have a new system”

“The entire system sounds stunning,” concludes Matthew. “It is the perfect match for a cinema as important, visually impressive and rich in history as the Pathé Tuschinski.”