Home » Hitting The High Notes Again In The Joan 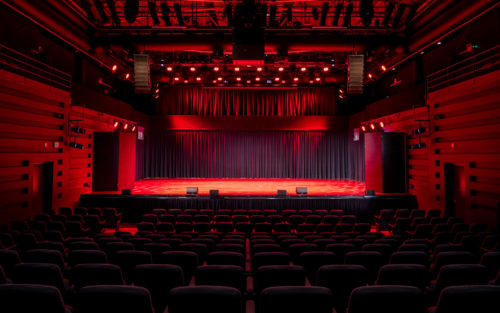 Opened in 1990, the venue has numerous performance spaces, and hosts a busy schedule of theatrical, musical and visual arts.  In mid-2019, Production & Technical Manager Geoff Turner and Head of Audio Tim Anikin looked to replace the old point source sound system that had served the dramatic theatre (The Q Theatre) from the beginning, to overcome the sound issues inherent in the space.

“The throw from the top of the arrays all the way to mix position, and the headroom of the system is exactly what we wanted, The intelligibility of the system makes it a dream to operate.” Tim Anikin, Head of Audio

The tender was won by Loud And Clear Sales, who in conjunction with Drew Bisset, designed and installed a system from Alcons Audio. When the system was commissioned the difference was immediately noticeable. In fact, the team at The Joan only had a chance to utilise it for a few months before the pandemic closed the doors to all the worlds performance spaces.

They were so impressed by the new system in the Q Theatre that they looked to the same team to quote on an upgrade to the larger and more challenging space, the Richard Bonynge Concert Hall. 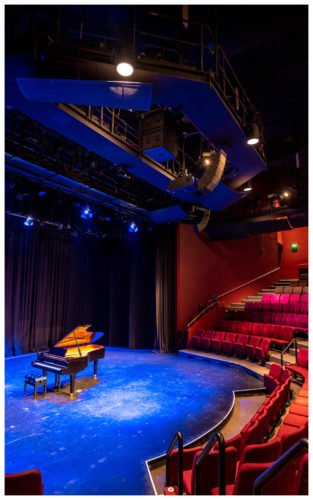 Designed, installed and commissioned again by Loud and Clear Sales and Drew Bisset, who again turned to Alcons Audio’s products for the ideal solution. The Joan now boasts a AAA (Aussie Alcons Audio) rating in the sound department!

Information on each room as follows:

A multi-purpose room with a thrust stage and audience of 378 in a semi-circular amphitheatre configuration. This allows fabulous sight lines, but a challenge to amplify and distribute sound equally.

“Our experience with the LR7 micro line array from Alcons Audio sent us there immediately” says David Betterridge, Director at Loud And Clear Sales. “What we didn’t realise until we did the modelling, was just how perfect a solution it was for the space!”

“3 arrays each of six boxes in 90 degree configuration gave us almost seamless coverage of every seat in the house, with the tiniest of overlaps occurring in the aisles. We could barely believe the data from the EaseFocus plot, but knowing the reliability of Alcons’ specs, we were very confident that if we could get the rigging points in the exact locations we needed, we could deliver.”

A pair of LR18B subs located behind the centre cluster provides deep sub extension for the system, which all runs from a single Sentinel10, 4 channel DSP amplified loudspeaker controller. All system processing is done within the Sentinel so no external processor was needed.

Removing the collection of older 15” and horn boxes from the grid and replacing with the almost invisible LR7 also freed up a huge amount of lighting angles that made Production & Technical Manager Geoff Turner very happy.

He says, “The difference is – there is no longer any difference! Before it was very noticeable as you moved around the auditorium, the change in level and frequency response. Now virtually every seat in the audience is hearing the same information at the same level. We were blown away.”

“Our experience with the LR7 micro line array from Alcons sent us there immediately, What we didn’t realise until we did the modelling, was just how perfect a solution it was for the space!” David Betterridge, Director at Loud And Clear Sales.

One of the things that Alcons pro-ribbon loaded speakers boasts is high-fidelity reproduction, even at high SPL. Whilst this was not a significant factor for the Q Theatre the Concert Hall system needed the headroom to support contemporary acts and the definition to support the many orchestral and spoken word users of the space. 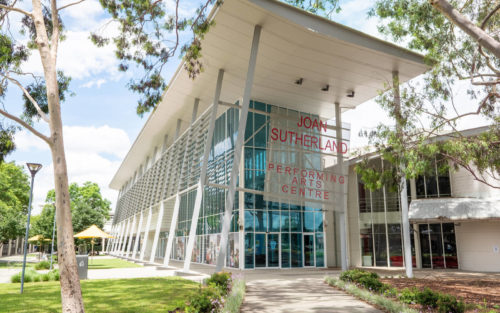 A 550 seat perfect rectangle, it boasts both amazing natural acoustics, and some real challenges inherent with such a space, especially at high SPL. It was important to focus the system on the audience area and avoid as many reflections off hard walls and floors as possible.

A true stereo system was requested, and the need to keep the footprint as small as possible led the same team to Alcons Audio again for the solution. Custom rigging designed and supplied by Drew Bisset allowed placement of the Left Right and Sub arrays exactly where they were needed. The very versatile new VR5 mini monitor were used for front fill and side fill for the balconies upstairs.

The left/right arrays are each 9 boxes of LR14 ultra-compact line-array modules (90 degree format) and the deep sub extension is 3 x BF362 in cardioid mode, flown in the centre. 4 x VR5 act as front fill and 2 x VR5 cover the side balconies upstairs. The system is powered by 3 x Sentinel10 amplified loudspeaker controller running ALControl software, which allows easy programming for the various user applications required. These range from a simple Left/Right feed for basic presentations, to full access to all channels for advanced users and touring engineers.

“The throw from the top of the arrays all the way to mix position, and the headroom of the system is exactly what we wanted” noted Head of Audio Tim Anikin, “The intelligibility of the system makes it a dream to operate.”

Alcons Pro-Ribbons Are The BASIS Of Versatility

As part of a project funded by the European Union, a former military barracks in northern Italy has