With Roxy Music he celebrated international successes in the 1970s, in 2019 the now 74 -year-old Bryan Ferry presented his greatest hits once again as part of a major world tour, which led him for five dates also to Germany. Special attention received his concert at the Hamburg Elbphilharmonie; Here the PM Blue GmbH provided, as a technical service provider, an unforgettable sound experience together with Alcons systems. 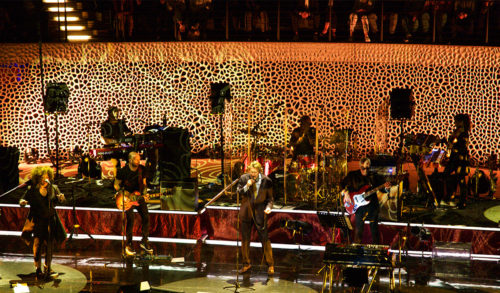 PM Blue has been serving the Elbphilharmonie for many years. Even before the planning of the “Elphi” both companies were connected through the joint cooperation in the Laieszhalle. The team led by project manager Jo Stankowski, as such, also provided the sound system for the concert of Artrock legend Bryan Ferry at the Elbphilharmonie; And as always at the Konzerthaus in Hamburg’s HafenCity, relied on a sound reinforcement system from the Dutch premium manufacturer. For the 360-degree sound reinforcement mainly LR18 and LR7 pro-ribbon line-array systems were used.

“The Alcons systems are doing very well in the Elbphilharmonie, they are characterized by a very high degree of transparency, which in combination with the already extremely transparent sounding room, simply delivers the best result.”, Jo Stankowksi, project manager PM Blue.

The main PA consisted of a stacked 5-cluster of LR18/90 compact line-array on a BC543 triple-18″ cardioid subwoofer. Right next to it, another BC543 was used. The near field in-fill was taken care of by 4x LR7/120 micro line-arrays. The rearward projecting sound system consisted of 6x 3 LR7/120 each on a tripod, supplemented with two out-fills each consisting of 3x LR7/90, between the main PA and the first rear-fill. This ground setup has proven itself and serves PM Blue as the standard setup for the lower listening areas up to the first ranks. With minor adjustments, it has been used since the first rehearsals. “At the request of the artist, we only doubled the bass here,” says Jo Stankowski, Senior Project Manager at PM Blue. 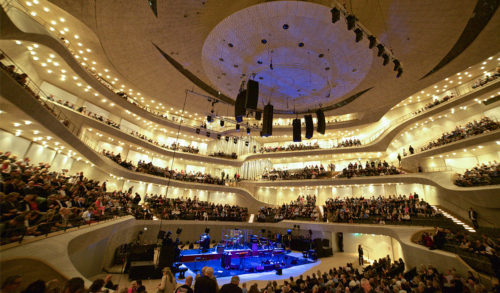 A truss circle placed above the stage was used for the sound system for the upper ranks. This set-up consisted of six 10-pce Alcons LR18/90 arrays for each left / right main, side and rear slope; Also a cluster of 2 Alcons RR12 point-source arrays served as rear-fill for the nearfield; For the low frequency support, a cluster of 8 Alcons LR14B line-array bass were mounted.

How do you amplify one of the best concert halls in the world?

The sound system in the Elbphilharmonie is basically not that complicated, asserts Jo Stankowski, who has already performed concerts in the hall by such great artists as Ute Lemper, Helge Schneider, Nils Frahm, Mireille Mathieu, Max Mutzke, Element of Crime, Dionne Warwick or Bill Murray. “There are very good cable routes, flight points and ceiling loads to work comfortably. It only becomes problematic if system engineers and mixers do not get involved in the room or the musicians have certain ideas that are counterproductive. Powerful Rock ‘n’ Roll, for example, is simply unthinkable here, because the room has such excellent acoustic properties that it quickly gives the impression that everything you put into the room on acoustic energy comes back several times. ”

Even loud monitoring could quickly become problematic in the Elbphilharmonie, because “it becomes impossible to control the sound,” Jo reports. “We already supported some excellent concerts, in which both artists and engineers adopted the room acoustics in their performance, without fighting the physics. InEar monitoring helps, of course, but in principle: less is more, especially in terms of volume. ”

“Unobtrusive sound” with 70 speakers in the ceiling

PM Blue’s stated goal is always to make the sound in the concert hall as discreet as possible – a difficult undertaking with 70 loudspeakers in the ceiling, as with Bryan Ferry. “Imaging and fidelity to the original source are of great importance to us, which is why we try to follow the natural ‘direction of sound’ of the room,” Stankowski continues. The world-famous Weinberg hall of the Elbphilharmonie is designed according to acoustician Yasuhisa Toyota in all its details so that sound is carried from the stage to every seat.
“In order to realize the imaging and the appropriate sound direction here, we worked for a long time on our sound system design and made changes whenever necessary,” says the project manager. “Basically, we did a great job when the listener wonders why he sees speakers everywhere, “the grand piano is loud enough already”…”

Of course, the sound characteristics of the speakers used play an essential role in this. “The Alcons systems are doing very well in the Elbphilharmonie,” Jo Stankowksi says after more than two years of “Elphi experience”. “They are characterized by a very high degree of transparency, which in combination with the already extremely transparent sounding room, simply delivers the best result. 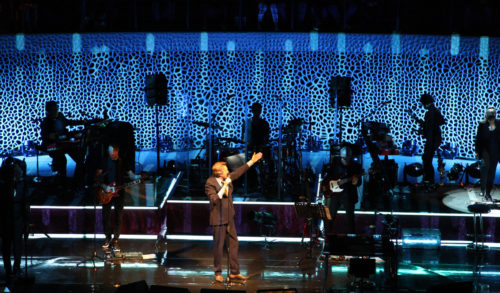 From the beginning on, we’ve experienced the Alcons systems as very defined and linear; The speakers provide us with the best possible technical means to control the final result, and every intervention in the signal is faithfully reproduced here. Moreover, they are very precise tools. ”

Results that can also be tracked in the case of the Bryan Ferry concert. “Artists and sound crew were very pleased with the sound in the hall. After handing over, the crew only minimally adapted the system to their taste, especially the volume ratios of the individual speaker groups. A bad or unfamiliar sound, especially in the Elbphilharmonie, quickly finds its way into the newspapers. At Bryan Ferry, however, both the press and the audiences were consistently very positive. ”

PM Blue has been working successfully for years with Alcons audio systems, with which the team has been participating in festivals such as Elbjazz and Jazz Baltica, various tours such as Alan Parsons Live Project or Nils Landgren, as well as demanding corporate events such as the Volkswagen works staff meetings in Wolfsburg, realized with over 150 loudspeakers. The results speak for themselves.

“You often hear that Alcons sound very hi-fi. And that’s right. The systems are simply among the best possible sound transducers. Some have difficulty with that, as you can tell by the fact that it is often said that the speakers are not as loud as others. This impression often arises with people who expect the typical distortion of compression drivers with horns at the same sound pressure level. This side effect of non-linear air compression and nonlinear deformation of the driver diaphragm at high levels fatigues the listener for a long time, but at the same time is perceived as ‘loud’. We counter that with examples such as the concerts of Iron Maiden, Kiss, Def Leppard, Iggy Pop or Volbeat or the presentation at Prolight + Sound last year with PRG. And then there was the Dance Valley Festival – all events that nobody ever thought of “being pretty quiet … ” says Stankowski, laughing.

PM Blue has a wide range of Alcons pro-ribbon systems, including the LR7, LR14, LR14B and LR18 line array systems, as well as the QR36 line-source array, VR8 and BF302 bass systems. For amplified controlling, Sentinel3, Sentinel10 and ALC2 are available in Hamburg.