The Old Church is a non-profit entertainment and event venue in the West End cultural district of Portland, Oregon. Already renowned as a space for acoustic and classical performances, the recent installation of an Alcons Audio LR7 system has made a significant difference in attracting a wider range of performers and audiences. 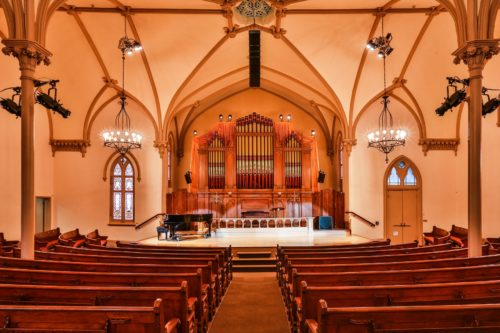 Originally built in 1882, a dwindling congregation meant that in 1967 an alternative use had to be found for the building or it faced demolition. A band of Portland citizens formed a non-profit organization to preserve the building and use it as a performance space to enhance the local community.

“It immediately proved its superior audio quality; It also proved that we could get a lot more speakers and high frequency control from much less weight than with any other manufacturer’s products.” Gary Stokes, audio engineer for Queen and Adam Lambert

The Old Church is a contemporary, comfortable and accessible space, but the board of directors is always looking at ways to improve it. Recently they raised $272,000 with the aim of upgrading it to become a world-class concert hall. Gary Stokes of Stokes Sound – FOH Engineer for kd lang and audio engineer for Queen and Adam Lambert – was brought in to assist a project which would include the installation of a permanent sound reinforcement system.

“Throughout its life, the building has been a favorite location for classic and acoustic music in Portland,” he says. “It never had a permanent sound reinforcement system before, the only systems used were portable, which were brought in if needed.” 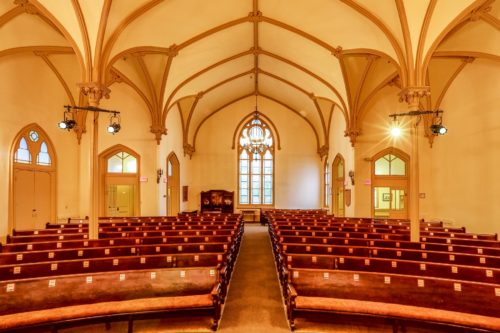 In 1972 The Old Church was added to the National Register of Historic Places as an excellent example of Carpenter Gothic architecture. This, together with a recent internal restoration, made installing a permanent audio system a considerable challenge.

“There are a lot of limitations regarding what you can do. It has no proscenium, the weight limits for flying loudspeakers are extremely low, the acoustics are very reflective and, because of its historic nature, you cannot do anything to dampen the room. In addition, the audience is seated in a 260º arc around the stage, so installing a system without getting speakers in sight lines or throwing a lot of energy at the walls was extremely difficult,” says Gary.

The venue installed a temporary system to see if installing permanent sound reinforcement could attract a wider range of performers. Gary continues, “It didn’t look great, but it proved the point and we were given the go-ahead to investigate permanent systems.”

Having used Alcons Audio’s pro-ribbon technology on the Jesse Cook US tour, it became increasingly clear to Gary that, as the process of looking at different systems progressed, an Alcons system would be the best solution to satisfy all of the venue’s needs.

“We looked at a range of options, but I had a feeling Alcons would be really well suited, thanks to the advantages offered by the pro-ribbon HF driver technology. Alcons also offers a wide variety of smaller, lighter loudspeakers that produce remarkable clarity and intelligibility with a very high SPL,” he says.

“The Alcons LR7 system has made a major difference in attracting national and international artists and boosting audience numbers.” Amanda Stark, Executive Director

David Rahn, Alcons Audio North American Sales Manager, was happy to arrange the loan of a demo system, which was set up on stands while Gary spent time taking acoustic measurements. “It immediately proved its superior audio quality, which was very obvious to the board members,” says Gary. “It also proved that we could get a lot more speakers and high frequency control from much less weight than with any other manufacturer’s products.”

The chosen solution was a mono central cluster of six LR7/120° and four LR7/90° micro line array modules, supplemented by fills of six compact versatile VR8 monitors and two mid-sized versatile VR12M monitors, plus a pair of BF181i mkII compact subwoofers. The system is powered by Sentinel3 and Sentinel10 amplified loudspeaker controllers, the ‘engines’ behind every Alcons system which are designed to get the maximum performance from the pro-ribbon systems.

“The system delivers greater advantages than you would get from a stereo system,” says Gary. “Using the 90º and 120º dispersion LR7s, the center cluster covers 80% of the audience. Because it’s such a live space, towards the back the audience normally gets less direct and more reverberant energy. The Alcons center cluster delivers more direct energy to the back of the room, meaning no need for delays. In addition, with the audience in a 260º arc, you would only give about 5% of them true stereo coverage anyway.”

An air return vent above the audience had enough of a wood beam structure above it for an additional beam to be installed, from which the LR7 cluster was flown. Installed by Professional Sound and Lighting of Portland, the system was completed ahead of schedule, with David Rahn on hand to provide direct support from Alcons.

“David worked closely with the installers to get the system exactly right. He did a lot of work to ensure it was properly done,” says Gary. “The board of The Old Church is very happy; the system is fulfilling the mandate of raising the venue’s profile very well.” 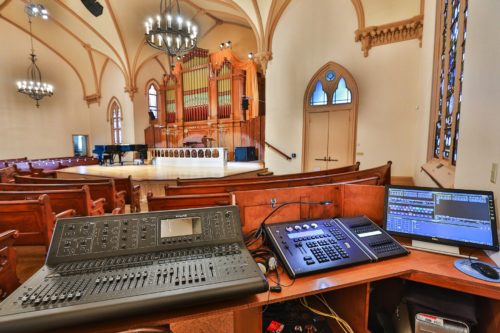 This view is confirmed by Amanda Stark, the venue’s Executive Director. “The improvements are ultimately about making The Old Church an inspiring place to make and hear music, and the Alcons LR7 system has made a major difference in attracting national and international artists and boosting audience numbers,” she says. “We get compliments all the time on how great the sound is now and we are seeing growing numbers of people from all walks of life flocking to this unique, historic building to enjoy our diverse programming.”

The system has been such a success that it is now being used for some acoustic performances as well, as Gary explains. “It’s very subtle and controlled, which delivers a better listening experience for both audience and artist. The word is getting out that it’s an amplified system which acoustic purists enjoy listening to.”