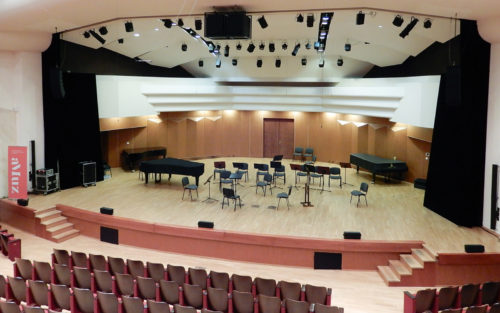 Opened in 1947, the Stanislaw Moniuszko Academy of Music (aMuz) in Gdańsk, Poland, has a progressive approach to music education, recognising that training students in classical music doesn’t mean they will stay in the traditional classical field. An Alcons Audio pro-ribbon system is helping students to seamlessly blend old and new instrumentation in the Academy’s concert hall.

Because course content at aMuz is constantly evolving, as well as classical recitals (where very little, if any, amplification is needed) the concert hall is staging increasingly diverse performances, including opera, operetta, musicals, jazz and contemporary classical productions, where electronic instruments play solo or with orchestral instruments.

“The Alcons LR7 system has provided a balanced and flexible setup, where classical and modern instruments can be played together with a very authentic and harmonious sound.” Grzegorz Fotek, managing director Aplauz

The 50 year old, 592m2 venue has an audience capacity of 413 in raked stalls and a balcony, with a 160m2 stage. Its existing small sound reinforcement system was completely inadequate for the evolving performance programme, so Piotr Rodak – chief sound engineer at aMuz – was looking for a much better system.

Piotr has his experience with Alcons products by using QR24 systems of local rental company Offstage, owned by Przemyslaw Waszkiewicz and from Alcons’ Polish distributor Aplauz. Having the system update in mind, Piotr attended a demonstration of Alcons Audio pro-ribbon systems hosted by Aplauz, where he spoke to Alcons co-founder Tom Back, Aplauz president and managing director Grzegorz Fotek and Patryk Kozak – Offstage-related sound engineer and owner of contractor company Sound Service.

Piotr comments: “It was immediately obvious that a pro-ribbon solution was the answer because, in a venue originally constructed mainly for classical music, it delivers audio with a very natural character, with directivity that minimises unwanted reflection,” 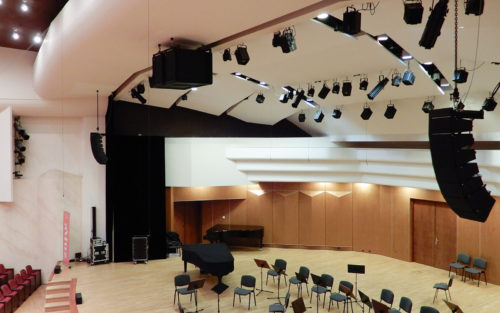 As a result, the only open questions regarding an Alcons system for the academy, were the final system setup and the proper budget allocation. After different demos and further discussions, an Alcons LR7 pro-ribbon micro line-array module system was selected and included in a wider venue system update. Designed in cooperation with and installed by Patryk Kozak (Sound Service), the system features four LR7/90 and three LR7/120 wide dispersion units, flown each side of the stage; Two BC322 cardioid subwoofers were flown as a central cluster and five SR9 ultra-compact in-fill monitors were installed at the edge of the stage as front-fills. It is powered and managed by twelve channels of Sentinel10 amplified loudspeaker controllers. System inputs are from microphones for instruments and/or vocals, with DIs as necessary from electric instruments, depending on the type of production.

“The sound of the Alcons system is clear, detailed and, thanks to the pro-ribbon technology, the audience experiences the sound exactly as it is presented on stage,” Piotr Rodak, chief sound engineer aMuz

“All kind of instruments and technology from popular music are now being adopted for contemporary classical music. As aMuz wants to prepare students for all situations that they might meet in their professional lives, it wants to help the students experience a wide range of musical styles and activities. This program cannot be delivered without a high quality amplified system in the concert hall,” says Grzegorz; “The Alcons LR7 system has provided a balanced and flexible setup, where classical and modern instruments can be played together with a very authentic and harmonious sound.”

“The sound of the Alcons system is clear, detailed and, thanks to the pro-ribbon technology, the audience experiences the sound exactly as it is presented on stage,” says Piotr. “We were so confident about the technology that we purchased the LR7 system, which had not even been demonstrated live in the venue, due the limited time available. But the final result is excellent.”