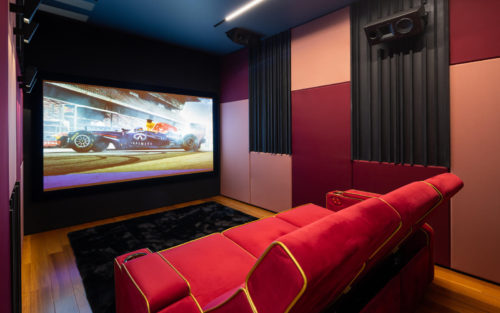 Israeli audiophile Yair is so passionate about cinema that, when he moved to a new luxury penthouse, he asked the building contractor to add an extra room for a home cinema. Being just as enthusiastic about high quality sound, he commissioned an Alcons Audio pro-ribbon system, despite the home cinema only measuring 3m by 5.5m > 3m / 9.8ft by 5.5m / 18ft.

“The client wanted a no compromise, full surround solution,” says Dan Nagar, proprietor of high end audio-video and home automation company CINEMART. “His previous home cinema was 350% bigger and I remember his call three years ago, asking me if it’s possible to have a decent cinema experience in a comparatively small room? I told him that with the right system – yes.”

“The client wanted a no compromise, full surround solution, his previous home cinema was 350% bigger and I remember him asking me if it’s possible to have a decent cinema experience in a comparatively small room? I told him that with the right system – yes.” Dan Nagar, co-owner Cinemart

Dan offered a turnkey solution for distributed audio and video in every room of the penthouse, as well as on a 250m2 outdoor balcony, but the home cinema is the centrepiece of the installation.

“We wanted to ensure that every seat received the same 3D audio quality,” says Dan. “In addition, achieving a flat low-frequency response everywhere in a small room is very challenging. We wanted power and as much low frequency extension as possible, but also for the sound to be very accurate throughout the room.”

Dan knew that only an Alcons Audio pro-ribbon system could achieve the desired quality in a comparatively small space. He was trusted to choose the right solution and a small 2.1 demonstration of an Alcons CRMS-SRHV compact horizontal/vertical reference surround and two CRMS-LFE18 large-format reference subwoofers confirmed that Alcons was the best choice. “It gave the customer confidence and produced a lot of excitement,” smiles Dan. 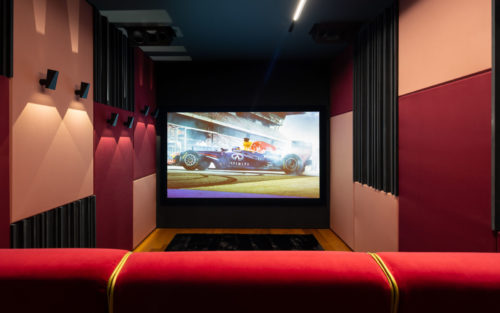 “People get excited when magic happens and audio sounds ‘just like the real thing, it makes them smile, be excited, and forget everything else. Alcons technology produces the most ‘you are there’ system that we have experienced in a more than 20 year journey into audio perfection.” Dan Nagar, co-owner Cinemart

“The optimized dispersion pattern of the Alcons CRMSCompact system ensured that the sound would be very even throughout the room. You can also clearly distinguish the sound coming from the centre channel, even if you are sat at the side, close to the main left or right speaker,” says Dan. “As all the speakers use the same pro-ribbon driver, the timbre matching is close to perfect. This ensures a seamless transition between all speakers and a true 3D sound field, which is very hard to achieve in a space of this size.”

“The CRMS-LFE18s delivered all the dynamics we needed and are the most fast, accurate subs we have tested. In such a small room, the results we achieved could not have been achieved with any other speakers that we know of.”

With a neighbour immediately below the penthouse, the sound of the high-powered Alcons system had to be contained. Omer Karni of Omer K Design built the room’s acoustic infrastructure, constructing a floating room with acoustic dampers and springs. The L-C-R CRMSCompact system and front CRMS-LFE18 subwoofers were built into a heavy wooden baffle wall, isolated with acoustic rubber, with the rear subs built into a custom equipment cupboard. Both the baffle and cupboard were backed with high density foam, while the side walls and ceiling featured MDF diffusers. 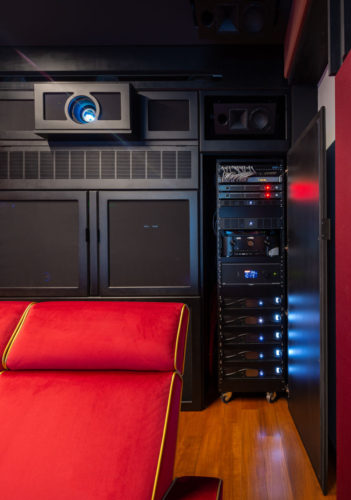 The floating room meant that there was even less room to install the audio system, which provided a further challenge for Dan. “Every element had to be calculated and tested before the installation. We brought the subwoofers in at the concrete stage and needed to decide on their exact position then, because there was literally no room for changes later,” he says.

Despite the challenges between them, Cinemart and Omer K Design created a home cinema that Yair is very happy with. “I am so excited about it, the result is nothing less than perfect!” he says.

“Dan led a similar project in my previous house and, as good as it was, there is nothing to compare with the new room and the Alcons Audio system. Alcons is so far ahead of the crowd that you can’t even compare it to other systems. The solution that Dan designed for this room makes it absolutely unique.”

“People get excited when magic happens and audio sounds ‘just like the real thing,” adds Dan. “It makes them smile, be excited, in the moment, recharge themselves and forget everything else. For us, this is the most important thing. Alcons technology produces the most ‘you are there’ system that we have experienced in a more than 20 year journey into audio perfection.”

Omer is similarly enthusiastic about the completed project and Alcons pro-ribbon technology. “We all were shocked by how the room sounded so much bigger than it actually is,” he says.

“We have been building recording studios and home theatres for ten years and I can definitely say that this room, with the combination of the Alcons CRMS system and StormAudio processing, has created by far the best home cinema experience I’ve ever heard.”