Home » Putting Omniversum Audiences At The Heart Of The Action

Putting Omniversum Audiences At The Heart Of The Action 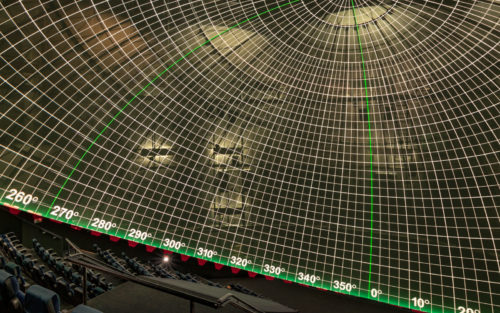 Opened in 1984, Omniversum in The Hague was the first IMAX Dome theatre in Europe. Showing spectacular films on a giant domed screen that makes the audience feel part of the movie, a new, €1 million projection system was recently installed to improve the experience. To make sure that the quality of the sound matched the images, a new Alcons Audio pro-ribbon system was also installed.

Built in the mid-1970s, Omniversum features an 840m2 dome, 300 seats and welcomes around 240.000 visitors a year. It is the largest film theatre in the Netherlands and the only IMAX Dome theatre in the Benelux countries.

“The sound is clean and clear throughout the entire bandwidth, thanks to the pro-ribbon driver’s linear, distortion-free response. It is a delight for the ears.” R. Rampersad, Omniversum Technical Manager

Many of the films it shows educate and inform audiences about the natural world and treating Earth and everything that lives on it with respect. However, the recent upgrade to its technical systems has been a key part of embracing ‘regular’ cinema productions as well.

Delivering high quality sound reinforcement in a dome-shaped room like Omniversum provided many challenges. These included acoustic issues, because the large projection surface also creates a lot of rearward reflection from the speakers, as well as making sure every seat in the audience enjoys full coverage with direct sound and that every member of the audience hears all audio channels, so they experience the intended sound imaging.

“When we decided to spend over a million Euros on a new projection system, we knew the investment would not be worth the money if we did not also invest in the best sound system,” says Berend Reijnhoudt, Omniversum Executive Director. “After looking at several options, we chose the Alcons pro-ribbon solution because it was the best choice for us to complement a unique visual experience.”

The system was installed by Delft-based Westamp Geluid. “While measuring the acoustic responses of the space, we decided to reposition the speakers into different clusters. This would achieve better differentiation between nearfield and far-field,” says the company’s owner and engineer Robert van Deursen. “It made the sound far less diffused than before, resulting in much better stereo imaging, in relation to the position of the source on the screen, throughout the room.”

“After looking at several options, we chose the Alcons pro-ribbon solution because it was the best choice for us to complement a unique visual experience.” B.Reijnhoudt, Omniversum Executive Director 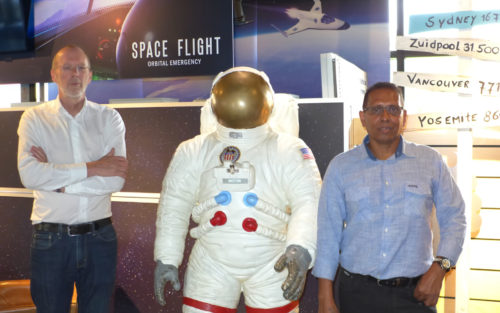 “We wanted to feature a wider range of programmes, which meant our already-wide range of visitors would become even wider,” says Omniversum Technical Manager Robby Rampersad. “Our shows have average sound pressure levels; they are not too excessive in loudness, but occasionally still very dynamic. With this as the basic requirement, I discovered Alcons pro-ribbon systems and was immediately convinced by them.”

“The CRS8 is a great speaker, with a very smooth but powerful mid-high frequency response. The few corrections I had to do were all due to the acoustics, screen and clustering,” says Robert. “The choice between the different dispersion patterns for the CRS8 was very useful, as it meant we could achieve minimum reflective spill.”

“The result is very, very good,” continues Robby. “The sound is clean and clear throughout the entire bandwidth, thanks to the pro-ribbon driver’s linear, distortion-free response. It is a delight for the ears.”

Berend Reijnhoudt agrees, adding, “When we reopened with the new system on July 1st this year, we knew we had made the right choice. People really notice the superb sound, they are walking up to us after the film saying how much they enjoyed the audio.
“But it’s not only the audience which notices the difference in the sound between us and other film theatres. It also impresses professionals who come to experience our new state-of-the-art projection system.”

Pro-Ribbon Systems In A Class Of Their Own in Norcross, USA