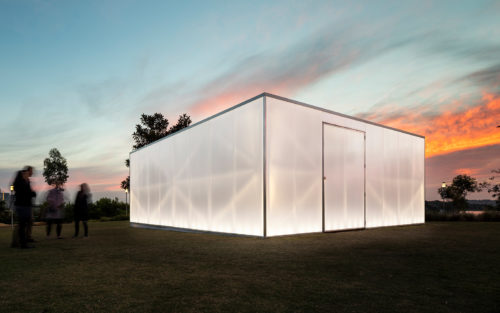 Australia’s Urban Theatre Projects (UTP) is dedicated to telling real-life stories which portray the many facets of modern-day Australia through site-specific cultural experiences. Many of its projects are presented in Blak Box, a unique, portable venue that uses Alcons Audio pro-ribbon systems for a fully immersive audio experience.

UTP’s latest production was Momentum, which was presented in Blak Box at Barangaroo Reserve, Sydney, throughout the first half of November. Alcons Audio systems for all Blak Box productions are supplied by David Betterridge of Sydney-based Loud And Clear Audio Pty Ltd. The Momentum system comprised six pro-ribbon VR5 mini versatile monitors and two BF151mkII compact subwoofers, powered and managed by two Sentinel3 amplified loudspeaker controllers. The VR5s were evenly-spaced around the perimeter of the internal wall, with the BF151s placed in opposing corners, between the internal and external walls.

“The speakers don’t just amplify, I can honestly say they deepen the experience. The sound is warm but crystalline, to my mind Alcons speakers are far superior to any other systems I’ve worked with in 25 years.” Daniel Browning, sound curator Momentum

“Each project presented in Blak Box is an individual work created by different teams, with different styles of storytelling, music and soundscapes. It’s quite an intimate space, so the quality of the system is paramount,” says David. “For Momentum, the brief was to supply a very compact system, because there was very little space for the top boxes, but which would be capable of reproducing a very varied range of speech and musical styles.”

David and his team proposed the Alcons VR5 because it delivered very high fidelity sound, but was able to fit into the very tight space between the top of the internal walls and the roof of Blak Box.

“It was a challenging project, as the design of the room itself was modified as the production evolved,” says David. “The gap between the inner and outer walls of Blak Box is very tight in many places and it’s filled with lighting/cooling and other tech, so finding suitable ways of mounting the VR5s in the correct locations and even running cables to them meant a number of re-thinks to our original plans.” 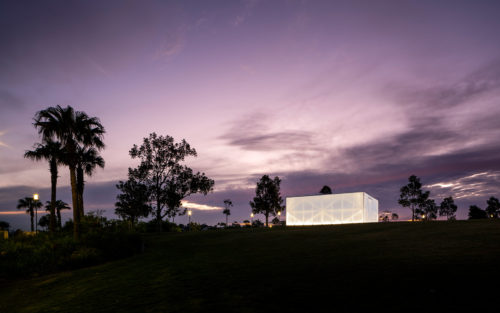 The curator of Momentum was Daniel Browning, who used the 1983 video of David Bowie’s Let’s Dance – shot partly in Sydney, around what is now Barangaroo – as the basis of a project to examine the representation of First Nations (or indigenous) peoples in popular culture. The pre-recorded soundtrack comprised music by composer Eric Avery, vocals by Ursula Yovich and a suite of poems and spoken word by emerging new writers.

“As a sound curator, at the outset I’m entirely focused on the quality of the recordings. It’s when I’m immersed in the studio that I hear all the nuances, the blips and occasionally the defects present on them. Much of the content I curate is spoken word and there are lots of variables in that,” says Daniel.

“For my work, it’s crucial that every breath, every inflection or intonation, every editorial pause can be heard clearly and what I’ve noticed with Alcons pro-ribbon speakers is that the quality is so good, I’m often hearing things for the first time. You literally hear everything and they handle everything superbly.”

“The speakers don’t just amplify, I can honestly say they deepen the experience. The sound is warm but crystalline, to my mind Alcons speakers are far superior to any other systems I’ve worked with in 25 years.”