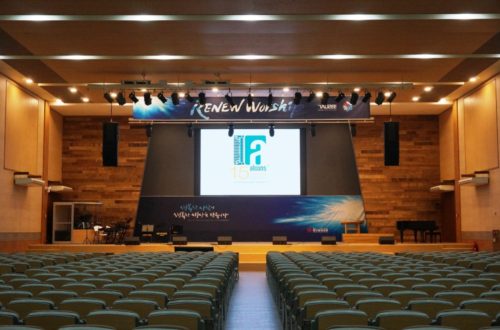 With a growing youth congregation enjoying high energy, high volume praise, the existing audio system at South Korea’s Gyeongsan Central Church was definitely showing its age. But with the installation of an Alcons LR14 pro-ribbon system, the sound of its worship has been transformed.

Gyeongsan Central Church is a Presbyterian church located in Gyeongsan City, 300km from the South Korean capital Seoul. Since it was founded in 1959, the church has grown steadily and is currently the largest in the city, with a congregation of 5000.

“The Alcons solution ensured that we could deliver the best possible sound pressure and frequency characteristics from the front row to the control room at the back, while also minimising reflections from the side walls and ceiling.”, Glenn Suh, CEO Corelab

The church has a particular focus on youth, whose services are held in its second largest space – a 30m long, rectangular hall. Its audio system was installed when the current church complex was built, nine years ago, but the growing youth attendance and greater worship enthusiasm showed that it was clearly now inadequate. 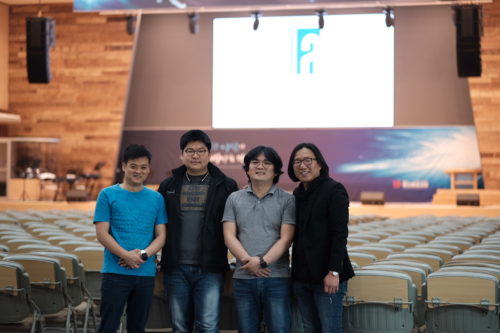 The church has a seven-member committee of elders and ministers, who had already received proposals to solve the problem by adding extra front fill and monitor speakers. However, when they spoke to Park Sang-hyun of Seoul-based audio contractor Sky Sound, he rightly said that changing a few speakers wouldn’t make sense, considering the audio issues affected the entire space.

He suggested that replacing the entire Front of House loudspeaker system with an Alcons Audio pro-ribbon system would radically improve the sound throughout the hall. Ample proof of this was provided when Park discussed the Alcons LR16 compact line array and LR14 ultra-compact line-array systems that are installed at the Chunma Arts Center in nearby Yeongnam University. With the church having held a number of events there and a rental system of Alcons VR8 compact versatile monitors and BF151 compact subwoofers also having been used on a previous three-day youth retreat, the committee needed no more convincing that Alcons was the best solution. 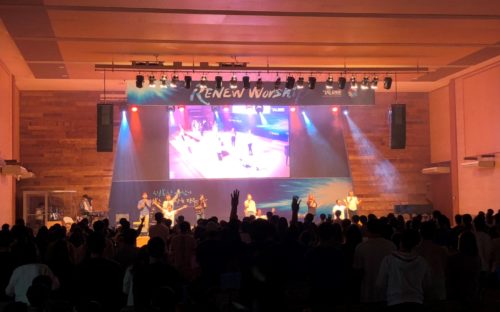 “Ecosystem has installed Alcons systems in other locations, including the LR14, and has also worked as a construction installation partner for Corelab, so the three companies were a very good combination,” says Corelab’s Glenn Suh. “The Alcons solution ensured that we could deliver the best possible sound pressure and frequency characteristics from the front row to the control room at the back, while also minimising reflections from the side walls and ceiling.”

He continues, “The only minor concern we had was about low frequencies, so we decided to retain the 18 inch subwoofers from the previous system. However our concerns were unnecessary – we found that the LR14B reproduces very faithfully down to 40Hz and the existing subs are rarely used.”

The exceptional controllability of the new Alcons pro-ribbon system means that, however loud and enthusiastic the praise, every member of the congregation clearly hears every one of the all-important words of worship.

“The church now has an excellent audio system and everybody is very happy,” says Glenn. “The ministers and young people who worship at this facility are reinforcing their faith in the newly renovated hall with the best possible sound!”