The story of how a group of residents from Savannah, Georgia, joined together to save the city’s historic Lucas Theatre from demolition has entered American theatrical folklore. Not content with just saving it, however, the building continues to be updated for 21st century audiences. The most recent improvement has been an Alcons Audio system, which has delivered superb sound without impacting on the venue’s aesthetics. 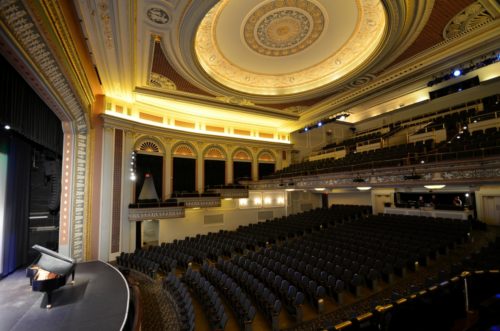 Originally opened in 1921, dwindling audiences saw the Lucas Theatre close in 1976. Various attempts to convert it to different uses came to nothing and a decade later the derelict building was on the brink of demolition. But a spirited local campaign saw the venue purchased and the start of what would ultimately be a 14 year, $14m restoration.

Reopened in 2000 as Lucas Theatre for the Arts, nowadays the venue is supported by Savannah College of Art and Design and plays a central role in city life, hosting a diverse array of films, plays, musicals, corporate events and all kinds of live music. It also plays a key role in the annual Savannah Film Festival, staged by the college every October and attracting over 40,000 visitors. 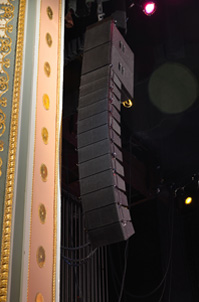 Last year Jon Maslansky of Summit Systems, based in Buford, Georgia, was working with the venue to solve several control and infrastructure issues. Theatre manager David Harris had also been looking to improve the venue’s ageing audio system, but its architectural and historic importance meant that the visual appearance of any new system was every bit as important as delivering high quality sound. “Given the theatre’s remarkable survival, through many political and economic pressures, there was major concern about the aesthetics,” says Jon. “Having worked closely with David on other issues, we gained his trust and were able to work closely with the theatre management, assuring them that we could deliver a suitable solution.”

After significant research, systems by Alcons Audio and two other manufacturers were selected for onsite demonstrations.

“The criteria for the chosen system were that the system had to maximise audio performance for all uses of the venue, but with absolutely minimal visual impact. The Alcons solution out-performed the other systems in every respect,” says Jon. 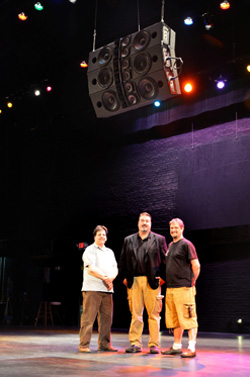 The installed system comprises per side 12 LR7 micro sized pro-ribbon line array modules, each with 6.5” woofer and RBN401 proprietary 4” pro-ribbon driver and two LR7B flown bass units, with dual-tuned 12” woofer. Additionally there are two BF181 single 18” subs beneath the stage; To support the regular showing of movies as well as the annual Savannah Film Festival, a brand new cinema centre channel was installed, working together with the left and right LR7 arrays.

Not only is it the first US theatre/cinema hybrid installation using Alcons equipment, it’s also the first US-deployment of the Sentinel; Alcons’ proprietary DSP amplification platform. The complete Lucas sound system is powered and controlled by 3 Sentinel3 and 1 Sentinel10 quad-channel amplified loudspeaker controllers, with speaker-specific drive power and processing.

“Alcons made the project very easy,” says Jon. “From the demonstration, through the design, installation and post-installation support, I was very impressed with the importance/priority that the company put on the overall project and our integrator/manufacturer relationship.

Every response from Lucas Theatre staff and users towards the system has been extremely positive. Indeed, Savannah College of Art and Design was so impressed with the improvement in audio quality that Alcons was asked to install a temporary audio system in the nearby Trustees Theater for the duration of the annual film festival.

“We love the Alcons system. It’s very versatile – we do so many things in the space and it’s more than up to the task for every one of them,” say Lucas Theatre manager David Harris and production manager Bryan Bailey. “We are happy with the partnership; not only do we love the product, the support we receive is second to none!”