Home » Proving All-Rounder Reputation At The University Of Kassel 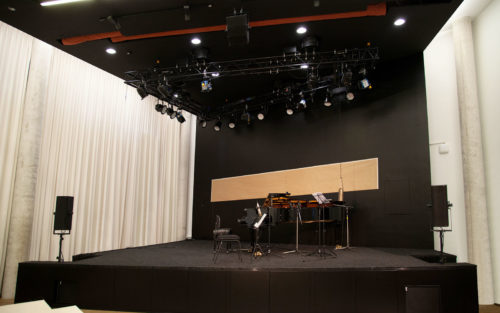 At the Department of Music (Institut für Musik – IfM) of the German Kassel University, prospective music teachers are being trained to teach at all kinds of schools. The department also has its own concert hall, which is used for concerts of all musical genres as well as lectures and examinations. Plain concrete walls and a high proportion of glass elements characterize the room – and place special demands on the sound system.

After a PA workshop with Rolf Dressler – probably Kassel’s “longest-serving sound engineer” in 2018 – instructors and technical assistants alike were highly enthusiastic about the sound of his Alcons system which he set up in the IfM concert hall in addition to the house system.

“I have not found such clarity, such uncompromising sound, in any other system through out all those years of my career as a sound engineer.” Rolf Dressler, owner Voice Musikproduktion

“Whenever we switched back from the Alcons to the house system during Rolf’s workshop, I kept thinking that our speakers had just been broken,” says Roman Beilharz, a lecturer in the popular music department and the main person in charge of sound engineering. “It was striking: the house system didn’t just sound worse in a direct listening comparison, it sounded downright broken! When switching back, the clear, punchy sound of the Alcons systems collapsed into a nasal, muffled mush. After that, it was clear which loudspeaker systems we wanted to install in the long overdue renewal of the hall’s technical equipment.”

Once the funds had been approved, the replacement of the PA system was put out to tender throughout Europe in 2020. The bid from Dressler, an Alcons user from the very beginning, received the highest score in the evaluation process and was ultimately awarded the contract for purchase and installation of the new PA.

Alcons’ QR24 (2 x 12″ RBN1203 pro ribbon HF and 4 x 6.5″ neodymium LF) is a modular 2-way column loudspeaker that can be used as a scalable vertical array system for permanent and portable applications. The system combines 1:1 linear, dynamic response with exceptional speech intelligibility, and achieves excellent performance in even the most acoustically challenging environments. The QR24 system provides coherent horizontal dispersion with seamless coverage. In addition to this patented projection, the pro ribbon driver’s natural cylindrical wavefront provides unparalleled control in the vertical range, minimizing sound reflections on floors and ceilings.

“The aim of this installation was to generate a sound that would appeal to classical musicians as well as jazz, rock or pop musicians – after all, all genres of music are being taught at IfM.” Rolf Dressler, owner Voice Musikproduktion

The 6,5” LR7 is the smallest Alcons pro ribbon line array system. Despite its compact design, the light-weight system offers all the features one would expect from an Alcons system: uncompressed, powerful and neutral reproduction with exceptional speech intelligibility, precise coverage control and high SPLs. 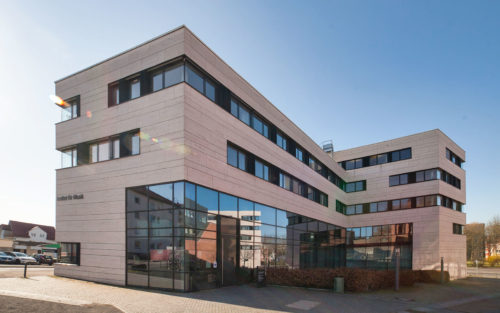 “The aim of this installation was to generate a sound that would appeal to classical musicians as well as jazz, rock or pop musicians – after all, all genres of music are being taught at IfM,” says Rolf Dressler. “But since the room is also used for lectures and talks, the new PA should also provide excellent speech intelligibility. The Alcons systems best met all of these criteria. This, combined with my experience with sound reinforcement in general and the Alcons systems in particular, was crucial for the customer. Even though the university is currently running in limited operation, everyone involved is very happy with the new sound experience in the concert hall.”

„And that comes as little surprise to me,” continues Dressler. “I myself am an outspoken fan of Alcons pro ribbon systems. I have not found such clarity, such uncompromising sound, in any other system though out all those years of my career as a sound engineer. In addition, Alcons’ product portfolio is very extensive and really covers all needs in the best possible way. From the very small to the very large, there is the perfect system for every application. I cannot think of any application where I wouldn’t recommend Alcons with utmost conviction.”