LR24; Clean As A Whistle, Even Up To Eleven. 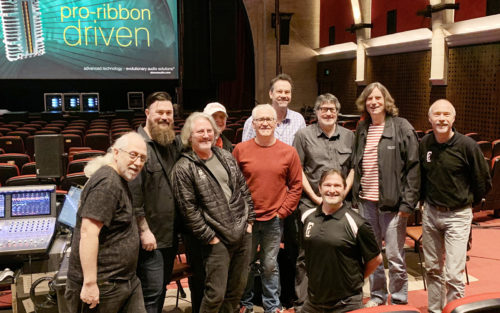 After impressing NAMM Show visitors with the new pro-ribbon LR24 mid-size line array during the Loudspeaker System Showcase, Alcons Audio gave the system its official introduction to the US touring market at Post 43, the legendary Hollywood base of the American Legion. Inviting an array of top mixing talent to ‘test drive’ the LR24 system and experience WYMIWYG – What You Mix Is What You Get – the system drew universal praise.

Described by its veterans as ‘that much more showbiz’ than any other American Legion post, Post 43 was the perfect location for the LR24 event. Two years ago, the completion of a comprehensive restoration transformed it into a state-of-the-art, 500-seat movie theater and live venue, complete with an Alcons pro-ribbon sound system. According to Levi Joos, proprietor of installer Stay On Screen, it transformed Post 43 into “one of the best-sounding rooms in town.”

“Really the thing that jumps out at you is really how much less work you have to do to get a really clear natural sound. It’s really special.” Brad Madix (Rush, Florence & the Machine) 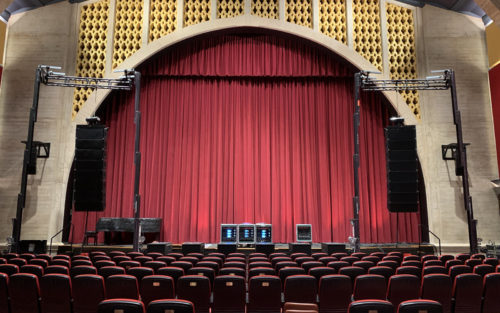 The event was attended by some of the highest profile US Front of House engineers, some of whom had already used Alcons pro-ribbon systems and others who were mixing through Alcons technology for the first time. Designed for medium to larger applications, LR24 was the perfect system to show what the artists they work with would sound like through a PA delivering exceptional audio quality at high SPLs.

“Mixing on the system is very pleasing. Why do I say that?; the lack of distortion in the PA system is absolutely stunning.” Greg Price (Black Sabbath, Ozzie Osbourne, a.o.)

“I tried a mix with tracks by an artist I’ve mixed probably 125 shows with, and the first thing that happened was I pulled everything off the vocal,” says Brad Madix (Rush, Florence & the Machine). “You do not need to be jacking around, pulling out frequencies in the top end, which really says a lot about the high end component of the system. It’s really special. Get out there and hear it!”

“The HF ribbons are exceptional devices. The texture, sense of depth, and the stereo imaging in that theater was truly remarkable.” David Morgan (Fleetwood Mac, James Taylor, a.o.)

Robert Scovill (Rush, Tom Petty & the Heartbreakers) brought live multitrack recordings he’d made with Patti Labelle and was equally impressed. “This event was my first exposure to the Alcons PA system concept, while actually sitting behind a console,” he says. “What a positively beautiful sounding system! A totally engaging experience and result.”

Fresh from winning the prestigious 2020 Parnelli Award for FoH Mixer Of The Year, David Morgan (Fleetwood Mac, James Taylor) was determined to experience the LR24 system for himself.

“My experience with other Alcons speakers had already made me a huge fan of their pro ribbon high frequency drivers. Their entire systems are a ‘game-changer’ and are my audio quality benchmark for live sound.” Gary Stokes (kd lang, Queen/Adam Lambert)

“I confess I ‘crashed’ this event but, if Brad Madix, Greg Price and Robert Scovill were all going to be in one room, I wanted to be there!” he smiles. “The afternoon ended up being a treat in all respects. The HF pro-ribbons are exceptional devices. The texture, sense of depth and the stereo imaging in that theater was truly remarkable.”

It’s not just the audio quality and power that this remarkable array of mixing talent was impressed by. It was also that Alcons has the conviction to push the boundaries of live sound to the next level.

“I think it’s great that there are people willing to continue to innovate and create what I think might be the next generation of systems, really focusing on very specific engineering issues that we have been facing for at least 40 years. The lack of distortion in the PA system is absolutely stunning.”  says Greg Price (Black Sabbath, Ozzy Osbourne).

“Alcons has definitely moved the bar a great deal with what they have done in every octave, but most notably the pro ribbon is a game changer! “ Gord Reddy (Alison Krauss a.o.)

“Greg is more into the harder side of rock so, for him, the system should not only sound great, but also have the balls to push through and bring extra power to the low-mids. He insisted playing the Rammstein song Engel through the LR24, which includes whistling as well as the band’s usual intense heavy metal,” adds Alcons Audio co-founder Tom Back.

“Even with Greg pushing the system up to (almost) eleven, the whistling stayed clean and separate from the compressed, overdriven guitars. All engineers agreed that any other system would have turned the whistle into a distorted, mid-high screaming noise, due to the break-up of the high-frequency driver diaphragm.”

“The physical coverage of the system was seamless and the intelligibility was nothing short of amazing.“ Erik Rogers (Godsmack, Hunter Hayes, Avenged Sevenfold a.o.)

With engineers asking for references to production companies who can supply Alcons pro-ribbon systems for upcoming events, the Post 43 WYMIWYG event succeeded in further raising their profile in the US, helping to address rider compliance through the evidence of people’s own ears. 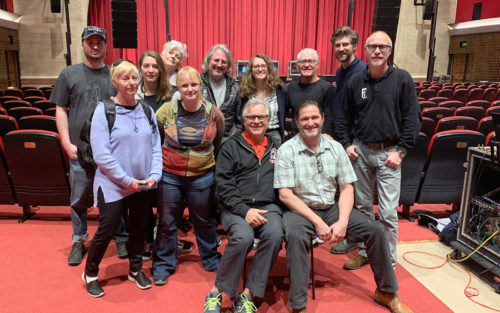 “Alcons pro-ribbon systems deliver the necessary clarity and delicacy at low SPLs, but they also have the balls to deliver high SPLs, while still maintaining the fidelity to make every detail audible,” says Tom.

Further engineer quotes:
“Wow, did it deliver! Critically listening with several more colleagues we all came to the same conclusion that this system is a game-changer. The physical coverage of the system was seamless and the intelligibility was nothing short of amazing. Regardless of level, the system never lost its clarity. It’s great to know that someone is actually listening and developing technology to help audiences hear more clearly.” Erik Rogers (Godsmack, Hunter Hayes, Avenged Sevenfold)

“I think this system has one of the most impressive high ends of any system I’ve worked on. It’s truly one of a kind. It helps you get ‘there’ in no time!” Dani Munoz, (Kali Uchis, Lykke Li, Ricardo Arjona)

“Ever since I learned how much more enjoyable and easier it is to mix any style of music on low distortion systems, it has been my pursuit to find better ones. The pro ribbon is a game changer!“
Gord Reddy (Alison Krauss)

“I think this system has one of the most impressive high end of any system i’ve worked on. It’s truly one of a kind. It helps you get “there” in no time!” Dani Munoz, (Kali Uchis, Lykee Li, Ricardo Arjona a.o.)

“Alcons pro-ribbon speakers are my audio quality benchmark for live sound. They are the ‘cure for the common compression driver’; a source of much non-linearity and distortion that we in the pro audio business have grown far too complacent about tolerating. As a mix engineer you don’t even realize how much harder compression drivers make it to get the results you want until you mix on the Alcons devices.” Gary Stokes (kd lang, Queen/Adam Lambert)

Go to LR24.info for more information about the LR24
For all the information on ‘what the engineers have to say’ click HERE